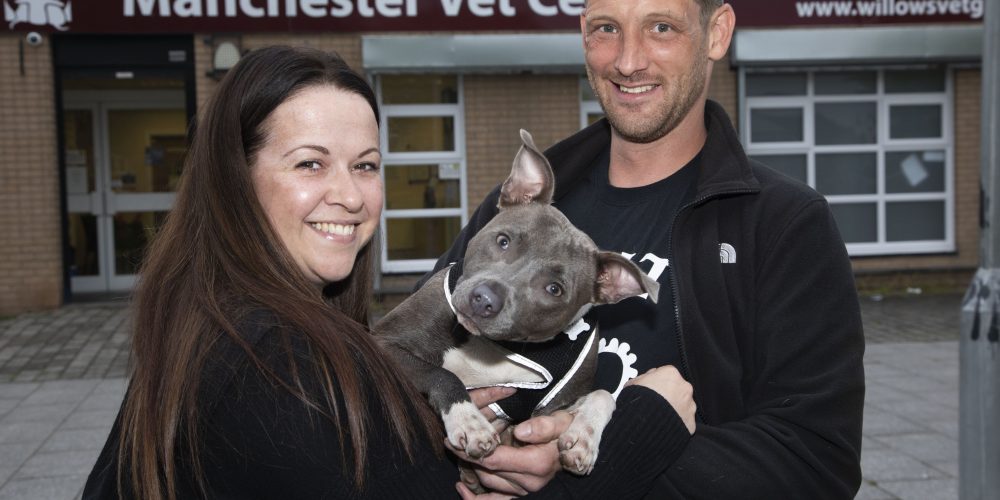 A COUPLE have gone to extreme lengths to give their Staffie puppy the best life after it was diagnosed with a rare brain condition.

Jodie and Mark Sutton ripped up their laminate flooring and put carpet down, re-laid new turf in their garden, have built soft steps up on to their sofa and tried bandage-style boots for 11-month-old Staffordshire bull terrier, Tinkerbell, who is thought to have cerebellar hypoplasia, which affects her fine motor skills and coordination.

With support from vet Ann Mee and her team at Manchester Vet Centre, part of Willows Veterinary Group, the pair from Dukinfield are putting their heart and soul into giving Tinkerbell a happy life.

Ann, who has been a vet for 24 years, admitted she had previously only ever seen cats with the condition in her career, but said Tinkerbell is “much loved and well looked after” by her owners, for whom she is on hand to offer advice on how to manage the non-progressive disorder.

She even signposted them towards some websites and videos showing how other pet owners deal with the condition.

Meanwhile, Jodie and Mark’s home renovations have already proved their dedication to the puppy they had only intended to take in for a week as a favour.

Jodie explained: “My husband’s friend is a dog breeder and Tinkerbell was the tiny runt out of a huge litter of 11 pups.

“Because she was so small, cried a lot and struggled to walk they were having trouble rehoming her so we agreed to take her in for a week to give the breeder some respite.

“We had never had a pet before and hadn’t intended on getting one because I was pregnant at the time.”

Her husband Mark said: “You could see how much she was struggling. She couldn’t get to food quick enough and because she was tiny and slipped around on the floor, she was pushed out by the rest of the litter.

“The breeders had to hand feed her to ensure she was eating and drinking.

“They wanted to find a loving home for her and she needed someone to give her 100% care and attention, so I took her home in the hope Jodie would fall in love with her like I had.

“She looked so frightened and small when I took her in the house for the first time that Jodie instantly fell in love with her and we knew this was going to be her forever home and we wouldn’t be giving her back.”

Jodie and Mark started to feel more concerned about their little dog when Tinkerbell couldn’t walk on their newly laid laminate flooring.

Jodie, 35, said: “She was slipping and sliding about and struggled with her coordination so we put towels down for her to allow her to grip the floor better and stop her from falling over.

“She didn’t want to touch the laminate, which was painful to see, so we ripped it up and put carpet down instead which helped her a lot.

“She would run about the house, from the front to the back, like she was celebrating the fact she could move without slipping.

“Her temperament and energy levels picked right up after that and the muscles on her legs started building as she could use them properly.

“She drags her paws and we noticed if we tried to walk her on concrete that her paws would scuff.

“We held off going for regular walks and decided to take her just to fields because we didn’t want her to miss out.

“Her first walk was such a satisfying moment. She had never been on one before and she bounced everywhere, ran up and down the field and it was great to see her using her legs and having no issues whatsoever.

“We tried her with dog shoes but she hated them, she just looked at us like we’d just dressed her in a tutu or something.

“We also wrapped her paws in bandages but they came off.”

Keen to find out more about what was wrong with Tinkerbell, the couple sought the help of vet Ann Mee at Manchester Vet Centre in Denton – run by Willows Veterinary Group – who gave a presumptive diagnosis of cerebellar hypoplasia based on her symptoms.

Willows Veterinary Group offers a wealth of knowledge and expertise through a network of 25 small animal practices, a referral veterinary hospital, two equine centres and a seven-office farm practice, located across Cheshire and into Greater Manchester, North Wales, the Wirral and Staffordshire.

Willows is accredited by The Royal College of Veterinary Surgeons.

Ann, who has worked for the Willows Veterinary Group for six years, said: “I first met Tinkerbell when she was six months old and her owners raised concerns over some bruising around her toes.

“She was unsteady and wasn’t holding or positioning herself properly for a dog of her age and I suspected she had an underlying neurological condition.

“After an examination, I gave a presumptive diagnosis of cerebellar hypoplasia, which I have only ever seen in cats before.

“The only way to be 100% certain was to do an MRI scan but Jodie and Mark have decided not to go down that route and together we are managing her symptoms to ensure she enjoys a happy life.”

Ann added: “Cerebellar hypoplasia can be caused by a number of things such as an injury or infection while in the womb, it can be hereditary but the latter is not consistent with Tinkerbell’s breed.

“It affects coordination and muscle tone and Tinkerbell occasionally has a slight tremor when her head is put in a certain position.

“She is off balance all of the time and has limited motor control over big movements.

“She falls over a lot and can’t support herself in certain positions, so slippy floors are the worst thing for her.”

Ann said Tinkerbell needed more supportive measures to give her more traction in her movements around the house to stop her from causing herself injury.

“Her condition can’t be cured, it won’t get worse or better so all I can do is help Tinkerbell’s owners manage it,” Ann added.

“I pointed them towards some websites and videos showing how other pet owners manage the condition but they are doing a very good job of it themselves.

“Tinkerbell is a lovely dog who is lucky to have been given a lovely home. She is very much loved and well looked after.”

Jodie and Mark, who have a five-month-old son called Zach said Tinkerbell’s condition is what makes her special.

Jodie said: “We want her to live a normal happy life, and she does, she’s just a bit wobbly.

“All we can do is make her home as accessible as possible for her to minimise the risk of her causing herself any harm.

“She’s full of beans, she loves walks and Mark, who wasn’t really a dog person before, absolutely adores her.

“Staffies have a bad reputation and it’s not fair or accurate. They are loving dogs, so friendly and so much fun. Tinkerbell is incredible and I’m so thankful for each and every day she is with us.

“We love her even more because of her condition, it’s what makes her special.”